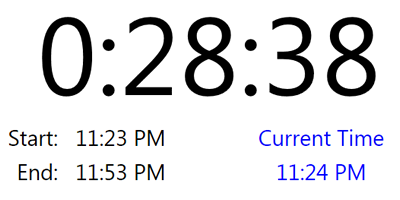 A countdown timer to display to students in test and exam rooms.

Created for The University of Auckland Department of Accounting and Finance in 2012
Technologies: C#, WPF

The traditional method of marking time in tests and exams has been to write up a time for every 15 minute interval on a whiteboard and then cross them off as they pass. In addition, it is usually marked up with indicators of when students are allowed to leave (typically not in the first half, or the last few minutes).

Since all test rooms at the University of Auckland are now equipped with computers and overhead projectors, several departments had adopted electronic countdown timers to be displayed on screen. The Department of Accounting and Finance wanted an automated that matched exactly the requirements of their tests. The features they wanted included:

The solution was a Windows application written in WPF & C# that can be run on any test room computer. It uses .NET framework 3 which was at that time part of Windows Update and so sure to be available.

The configuration is done in a small panel at the bottom of the screen. This is automatically hidden when the timer is started, but can be easily reopened by the test supervisors if they need to pause the test. Most of the text on the application is sized relative to the window size, so it shrinks and expands according to the space available.

Timer showing students can leave within a certain time

The timer was currently in use by the department at the time I left the University.